SeaBOS members ramp up efforts to transform the seafood sector 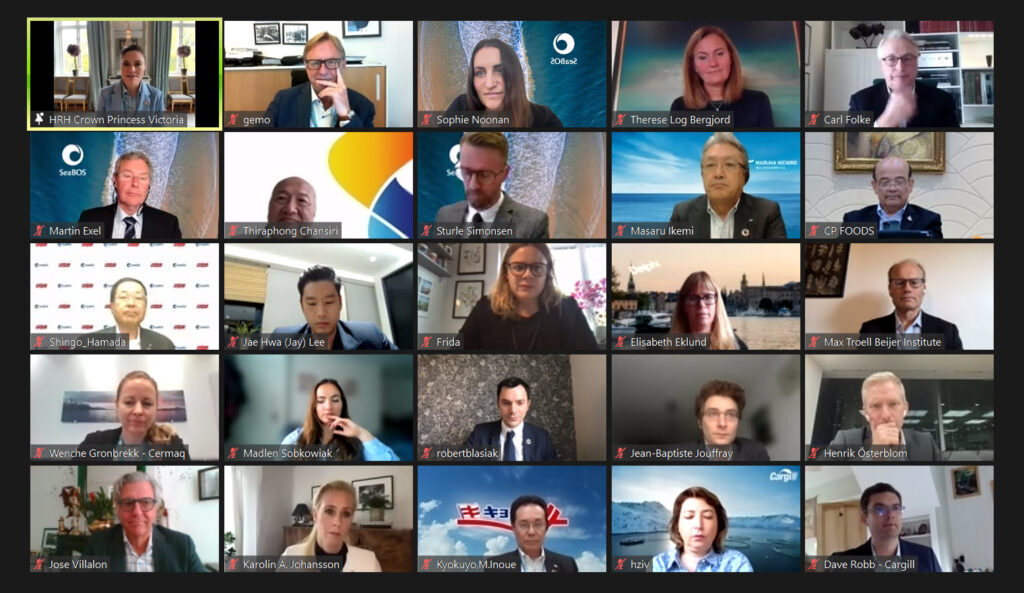 SeaBOS members agreed during its annual CEO meeting to continue activities designed to eliminate Illegal, Unreported and Unregulated (IUU) fishing and forced labour throughout their operations and supply chains, to protect endangered species, to phase out their use of antibiotics, reduce plastic pollution, and to continue efforts to limit their greenhouse gas emissions

Since its launch in 2016, the unique partnership between seafood companies and scientific partners has developed into a powerful model of cooperation to advance ocean stewardship not only in their own operations, but throughout the entire seafood sector.

Her Royal Highness Crown Princess Victoria of Sweden has been an active supporter of the initiative from the start.

Henrik Österblom, Director of science at Stockholm Resilience Centre noted that, “The science of SeaBOS and concept that led to its formation, is now moving into the next phase as members implement and meet specific goals towards achieving their original commitments.”

He went on to say, “This is exciting, and particularly as there are other industry sectors following the learnings of SeaBOS, and developing science based solutions to global challenges.”

Key highlights from the meeting included:

SeaBOS companies confirmed that individual risk assessments of their own operations showed no IUU fishing or forced labour activities. Members will now extend efforts to assess the risk of IUU fishing and labour abuse across their entire supply chains.

Given the endemic nature of these issues throughout the seafood sector, members recognise that risks remain high of either or both being found in seafood operations. Members committed to working with relevant actors to continue to assess and reduce their risk and should any indication of IUU fishing or labour abuse be found to act upon them swiftly and transparently.

To assess and help address these risks, several science-based and operational solutions have been and will continue to be applied, including:

• A global effort to map risks of IUU fishing and forced labour at port, at sea and associated with transshipment

• Electronic monitoring and use of novel technologies to extend traceability

• Voluntary procurement actions (PDF) alongside a tool kit of policies and procedures, and third-party certification approaches

SeaBOS members will engage in new efforts to minimise impacts on endangered species, with an initial focus on elasmobranchs (sharks and rays) and seabirds.

CEOs agreed on a SeaBOS Endangered Species Strategy (PDF) to achieve these aims.

Reducing the need for antibiotics

Amid the risks of antimicrobial resistance, working towards reducing the use of antibiotics in aquaculture is one of SeaBOS’ key commitments.

Surveys within SeaBOS companies have revealed the complexity of antibiotics use in aquaculture with differing international, national, and regional legislative requirements along with multiple different ‘codes of conduct’ and ‘farming standards’ already in existence.

During the 2021 meeting, SeaBOS members agreed to an Antibiotics Stewardship Roadmap (PDF) To begin they agreed to form a SeaBOS Antibiotics Code of Conduct by October 2022; surveys of operations; a workshop in early 2022, and that there would be zero use of specific antibiotics (HPCIAs and CIAs*) in aquaculture operations unless there are national jurisdictional or region-specific regulations already in place permitting that to occur.

Science based alternatives (eg vaccines) will be developed to replace those antibiotics, including through collaborations with relevant experts and governments.

While the agreement last year to establish science-based greenhouse gas (GHG) reduction goals by October 2021 was not fully met, nine out of the ten companies have already set their own emissions reductions targets.

Members agreed that by May 2022 they would all have GHG emissions reduction goals that align with the aim of the UN Framework Convention on Climate Change to limit global warming to well below 2, and preferably to 1.5 degrees Celsius.

Since 2018, SeaBOS companies have achieved an estimated 131,117 tonnes of absolute CO2-e reductions.

The critical role of sustainable seafood in human health and nutrition, and the opportunity to mitigate climate change impacts through innovative approaches in the seafood sector, are both key elements for SeaBOS inputs to the 2021 UN Food Systems Summit and the United Nations Climate Change Conference (COP 26).

Members emphasised the importance of industry-policy-science collaboration to have lasting positive impacts on sustainability and ocean health, and to ensure regulatory measures at a global level were supporting positive change.

“SeaBOS members will develop a more strategic approach to help build and promote better ocean governance, with added resourcing in the coming year to address those issues specifically” said Thiraphong Chansiri, Vice Chair of SeaBOS and CEO of Thai Union.

SeaBOS committed in 2016 to reduce the use of plastics in seafood operations, and encourage global efforts to reduce plastic pollution.

Multiple members participated in the 2021 international coastal cleanup programme, and plan to extend that amongst members and their subsidiaries as a mechanism to raise awareness and understanding of the challenge.

They reinforced the SeaBOS ‘city to sea’ strategy implemented in 2020 and agreed to report on plastics footprint assessments, as well as efforts to reduce or replace plastics in their operations by October 2022.

A fundament for future business

You don’t need to be on land to saw off the branch you’re sitting on. Emptying the ocean for fish will be the end of the seafood industry. President Makoto Inoue of Kyokuyo Co.,...

All you need to know about the official launch and other SeaBOS engagements during the conference in Lisbon SeaBOS staff and colleagues from the member companies and science par...

Initiative releases statement urging governments to “take all possible” steps to phase out subsidies that remain a barrier to sustainable industry transformation In a joint stat...

New study demonstrates extent of labour abuse and illegal fishing risks among fishing fleets. Of more than 750 ports assessed around the world, nearly half are associated&n...

Joining forces is better than trying to solve things alone

Shingo Hamada, President and CEO of Nippon Suisan Kaisha, reflects on why SeaBOS is important for the future of the seafood industry SeaBOS is unique because it is the first tim...

After 7 years in Cermaq, Wenche Grønbrekk is now taking on a larger responsibility for ocean stewardship, joining SeaBOS as Director of Strategy, Partnerships, and External Rela...

Sustainable seafood and SeaBOS on the agenda at COP26

Five of the most influential industry and multi-stakeholder platforms in the seafood sector have released a joint statement calling for action to combat the scourge of illegal, ...

For the first time in the history of seafood production, ten of the largest seafood companies in the world have committed to a set of time-bound and measurable goals that will e...

SeaBOS, comprising CEOs from ten of the world’s largest seafood businesses, calls on governments to urgently address the critical humanitarian, safety and economic crisis in the...

The Seafood Business for Ocean Stewardship (SeaBOS) will support the UN Global Compact Action Platform for Sustainable Ocean Business to accelerate progress on ocean health and ...

The Seafood Business for Ocean Stewardship concluded their meeting last week in Phuket, Thailand. This was the fourth keystone dialogue since the start of SeaBOS in 2016 at the ...

Announcement part of next phase of the Seafood Business for Ocean Stewardship (SeaBOS), a joint initiative between the world’s largest commercial seafood companies and science t...

READ MORE
We use cookies on our website to give you the most relevant experience by remembering your preferences and repeat visits. By clicking “Accept”, you consent to the use of ALL the cookies. However you may visit Cookie Settings to provide a controlled consent.
Cookie settingsACCEPT
Manage consent